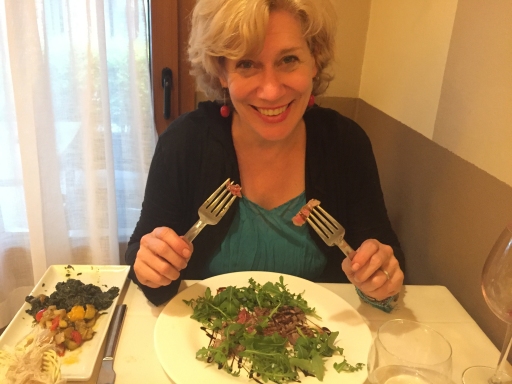 As if in celebration of my “twin sister” Jenny and I finally taking our trip together, Italy mirrored our joy with a symphony of doubles. And sometimes triples. And an infinite number of memorable moments in the two weeks we were together.

I’ll start with the Davides. Dah-vee-day. A Davide I met on my last trip to Italy, who rides horses invited me to go to the Palio. Another Davide who used to work in horse racing, discouraged me from going. “Too crazy,” he said, serving up the most exquisite pasta with boar sauce at his agroturismo, which I visited with my family before Jenny arrived. But when I texted his advice Jenny, she said “what are you thinking, not to go?” The Palio is one of those amazing European Festivals every horse person has on their bucket list! A bareback team horse race around the town square? “You may never get a second chance to go.” A favorite children’s book of mine had inspired this lark. We pursused it.

There were three Daniéles, the first of whom is soon to become my sister-in-law! And there were three Marcos, marking the beginning, high point, and end of my journey with Jenny. The first one was a white-coated waiter at the historic and infinitely elaborate Caffe Florian (yes THAT Caffe Florian in Venice, the one that appeared in my hot novella, the one after which we named our Carnevale Party). It meant the world to me to be there with my two books, writing a new story. The sweet Japanese tourists we befriended there should have tipped me off to the doubling theme: they pronounced their names Leya and Yuri—just like our friends back home who helped produce said Venetian-themed party.

In Venice cathedrals and science museums, we began to contemplate the infinite. 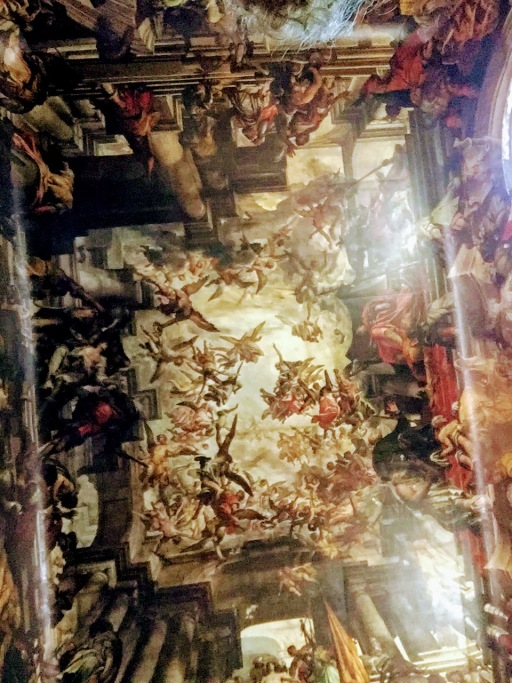 There was a doubling of magical creatures. Jenny and I, being Leos, thought we had found a mascot for ourselves that first day in Venice, in the winged lion of St. Mark. But when we got to Siena, fate assigned us to the Unicorn contrada, or team—the colors are orange and blue like the Broncos—which, for some reason, they call the Leocorno.

The night before the Palio, we attended the raucous Leocorn dinner party. We were seated at a table with a Chris and two Tonys, one of whom had the coolest tattoo of a strange ABC that eloquently signifies the orders of infinity. Between the kitschy elation of the Leocorn fight song and the endless bottles of local Leocorn wine… well, things got as trippy as when we’d visited Leonardo’s infinity cabinet in Venice.

The next day, we were standing awkwardly in a church square—two blond spectators at a deeply personal community celebration, waiting for our horse to be blessed for the race—when another guy with math tattoos smiled at us. This was our second Marco, a Sienese local who was absolutely vibrating with tension, like all the locals, in anticipation of the race. (Marco and the Leocorno were featured 5 years ago in Wide World of Sports video about the Palio).

A few hours later, standing in the hot sun on the Campo, shoulder to shoulder with ten thousand other onlookers, most of them locals feeling completely insane with anxiety, we each befriended an American Robert—hers, a recent college grad and mine, a student at the University of Siena who was there with his girlfriend—whose name was…Jenny!

When the race began and the horses thundered by, the crowd went absolutely nuts. Our black beauty with one white foot, Rocco Ro, did not win, but his cousin Rocco Nice, did. After the race we found a place to perch above a canyonlike street, safe from the brawling crowds, where we swapped movies of the dramatic, dangerous race with a second Daniéle, this one from Milan.

After Siena, we spent a few days in Florence gawping at art. 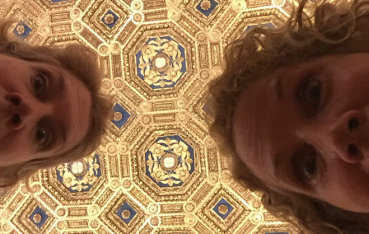 We stayed at a vibrant artist’s colony called Il Palmerino, and met a famous painter who works in Jenny’s style and art world, and a comedy rockstar named Chris.

To a very gentle and intelligent audience that contained two Emilies, we did a joint presentation about the last trip we’d planned to Italy. I’m preparing to publish a book about that disastered adventure, and Jenny is preparing a talk about art and brain surgery. “Saturation” was the perfect theme, since the trauma that kept Jenny from joining me on that trip caused her vision to become desaturated. Now that she is healed, she can see color again. To celebrate, we were drenching our senses with art and history, nourishing and amazing food, interesting people, and rich experiences.

Speaking of saturation: in all of Florence’s art museums, I noticed what seemed an infinity of Jacopos. I had never heard this name before Siena—the guy who got us the contrada dinner tickets there was the only Jacopo I’d ever met. As we traipsed from museum to museum, stopping for double gelatos and accordionists, we passed another seeming infinity of leather stores. In the last one we went to, a very friendly (and handsy) leather designer named Marco, our final Marco, sold Jenny the most fabulous teal leather jacket…right off MY back!

The last day of our journey, an Alessandro we’d met at the party gave us a ride to the train station, where he bought us delicious Proseccos (at 11am) and gave us a sweet send-off. On the train, we had to pay double the fare, since I’d messed up the dates when I purchased online. We got separated at the Milan train station where the third Daniéle helped me carry my unwieldy bags, and then we got a taxi ride with another Alessandro, who was as drop-dead gorgeous as the first one was kind.

At our last dinner, at an organic communal farm in urban Milan, the sunset glow lit a man at our community table who was a middle-aged, Italian version of a first love of mine. Sipping my last golden wine, I reflected on this final gift of doubling, reaching back into the infinite moments of memory. We had a delightful evening with the second Fabio, whom I befriended on my flight home from Italy last time. Sitting between him and Jenny, sharing so much laughter, I felt I had come full circle, doubly happy to have bridged time and space and language with an enduring friendship.

Follow along on the Ten Days, Ten Pounds page for more pix and stories and news about that trip, this trip, our publications and presentations!

0 thoughts on “Two infinity—and back again.”