We celebrate most of our holidays telling our favorite

Q: Why do the Irish wear Shamrocks on St. Patty’s Day?

A: Because real rocks are too heavy.

Q: What do you call an Irishman who hangs out in your yard all year?

Today I added this literary one at the 3rd Sunday Writers Club meeting:

An Irishman applied for a construction job. His interview with the foreman went well. There was one last question, a very difficult one. “Do you know the difference,” the foreman asked, “between a joist and a girder?”

I also wrote a fresh new bawdy one with a bitchy feminine POV—so rare for the Irish humor genre…!

Mary and Colleen were at a bar drinking and flirting. Connor teased Mary about the Guinness foam on her lip. Colleen was trading whiskey shots with Seamus. Then Erin walked in, hair tousled, wearing an off-the-shoulder sweatshirt, giggling and wiggling, as she was wont to do. Mary rolled her eyes at Colleen, who raised a sharp eyebrow. Soon the guys were competing to buy Erin drinks.

Colleen asked, “What’s she got that we don’t?”  Mary snorted into her beer and started giggling. “What?” Colleen was giggling now, too.

Boom! One more for the Erin-go-braless oevre!

Okay, now for a Limerick!

(Limerick is a city in Ireland, did you know?!) 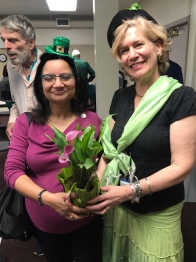 This is for a poet friend of mine the same age as me…who is having her first baby! As I was having a hot flash at her shower, I also had a flash of inspiration:

A poet who worked in haiku
Felt inspired to try something new.
“I know,” she said, “maybe
I’ll have me a baby
And write about nursing and poo!”